Museum in the Stadthaus

Museum for town and county Freudenstadt 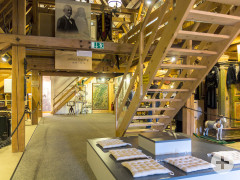 Marktplatz 65
72250 Freudenstadt
Lageplan anzeigen
Anfahrt/Routing
Fahrplanauskunft
Telefon:
07441 890-254
In the museum in the Stadthaus in the middle of the market place, you can discover the history of Freundenstadt and the county. – Every day (beside Monday) and free of charge!
"The forest lures - summer visitors, air catchers and tourists" in the big entrance hall of the Stadthaus, because here the history of the Black Forest tourism is told. Healing water, large hotels, fresh air and the construction of the Black Forest Highway span a wide area until the 1950s.

Over the red carpet you will be lead to the upper floor, to start „A time travel in the 1950s“, a homage to the house, which was built in 1954. The original 50s equipment builds the perfect ambience for this exhibition, which deals not only with the attitude to life but also with the social upheavals of the economic miracle period.

Since spring 2012 the permanent exhibition “Deterioration and rebuilt of Freudenstadt 1945-1954” is shown in the following East Hall. One is taken into the final phase of the Second World War, when Freudenstadt was destroyed by fire and bombardment in April 1945. In the following years, it was often about bare survival, as the exhibits show. But after nine years up to 1954 the city was brightly rebuilt. One is talking about the “miracle of Freudenstadt”.  How was this possible? Who were the heads and makers during this city-wide construction site? How did the debates and discussions go? By means of 14 boards and big panorama, the visitor is lead through the history. However, every station has also something to discover. Little by little, you notice that two children – George and Erika – tell us their own story: The adventure to survive and grow up in this destroyed city.

Afterwards, you can take a tour through 150 years of art in the region of the Northern Black Forest in the Art Cabinet. Paintings, watercolours supplemented by drawings and sculptures offer an interesting cross section and lead by stairs to the plane of the Ludwig-Schweizer-Saal.

In honor of Ludwig Schweizer, city builder of the rebuilt from 1949 to 1954, this big room has been named.
In the Schweizersaal the history of Freudenstadt and the county with is numerous cultural, political and religious fault lines are reproduced. Often Freudenstadt is there a crystallization point. From the Alemanni up to the 1970s, many original exhibits in the showcases tell their history. Napoleon has left his mark on the country; expats came from here and searched a new home in Russia and Oversea. The religious variety of the region and the clear expression of the "Protestant" and the "Catholic" can be easily understood here. Freudenstadt played a big role during the foundation of Baden-Württemberg in the 1950s.

The mighty roof houses a museum of local history in which, among other things, outstanding finds from mining in the Christophs valley are shown.
To the “retired father“ Julius Euting (1839 – 1913) an own compartment is honored to. He was research traveler in Arabia and a specialist for Arabic and Aramaic languages. The orient sharpened his view for the homeland. With fine watercolours he captured the beauties of the Black Forest landscapes. End of the 19th century he published the first hiking map of the region.

The entrance to the museum in the Stadthaus is free of charge.
The lower flats of the museum can be accessed by lift over the Café Pause.

Opening hours:
Monday closed
Tuesday to Sunday10:00 to 17:00 h
We wish to point out that it is not permitted to take photos in all the museum. Four-legged friends must unfortunately remain outside.