Park of the town 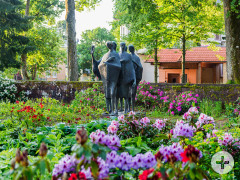 Lauterbadstraße
72250 Freudenstadt
Lageplan anzeigen
Anfahrt/Routing
Fahrplanauskunft
The name originates from the town twinning with Courbevoie, is named however by the citizens generally as the city park. In the park there is a memorial in honor of the fallen of the Second World War and a memorial stone to the 198. Inf. Division. On Memorial Day there is an annual wreath-laying ceremony at the memorial.
In spring, it is worth visiting the Rhododendron Blossom. On the total area of the park, there are rondels with old rhododendron stocks.
The partially very old trees offer in summer shady places to relax.
The city park was in the past the cemetery of Freudenstadt. After the place became too small, the cemetery was outsourced. Some very old gravestones can be found on today’s cemetery.
In the middle of the park there is the so called "Froschbrunnen". A low fountain with cast frog figures at the border.
The park is often used as a backdrop for wedding and family pictures.
^
Parkmöglichkeiten
Nach oben