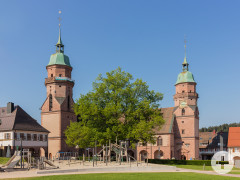 Marktplatz 35
72250 Freudenstadt
Lageplan anzeigen
Anfahrt/Routing
Fahrplanauskunft
Telefon:
07441 81469
Due to renovation, the City Church is currently closed and cannot be visited!


The laying of the foundation stone of the City Church Freudenstadt was on 2nd May 1601. Until 1608 the church was built uniquely angled hook shaped. Heinrich Schikhardt got the order to build the church not only late Renaissance but to use also elements of other epochs that is why also gothic forms form the building.
Big parts of the city were destroyed in the night of 16th to 17th April 1945 during the attack on Freudenstadt, also the City Church. The rebuilt of the city and the church from 1949 to 1954 was based on the old plans of Heinrich Schickhardt. The indoor space of today’s church is much more modest, as the coat of arms ceiling, the whole choir stall and the other ample inner equipment got lost during the deterioration.

Today the crucifix (around 1500), the baptismal font (around 1150) and the reading desk (around 1150) can still be admired as unique works of art in the church.
The corps of the crucifix has the size of a human that time (of about 1,70m) and the facial expression changes depending on the position of the observer. From left, you will see the face of a suffering, tortured people (during the death torture on Golgotha), from the front observed a peaceful face of a dying people which found his peace and from the right the peaceful fallen asleep (deceased) Jesus.

The baptismal font, from Lombard lay monks, who were wandering through the countryside that time, carved into the monastery workshop Hirsau, still refers to ancient times when the baptized were completely immersed in water. Divided in three zones, which are all divided by a thick cord tape, the lower zone show, the world without the believe in god, the main zone the struggle of the asserting power in the world against the good power of Jesus Christ and at the top of the border as smallest zone the eternal wave band, the baptismal water, through which the person baptized is supplied to the Christian faith.
The reading board was moved from the monastery Alpirsbach to Freudenstadt. A little sensation, as the figures carved from a lime tree trunk show for the first time in Southern Germany a work of art, which is manufactured with full round figures and no longer relief-like. The box, carved from willow wood, was then put on the holding hands and shoulders of the four evangelists.

These evangelists can be recognized by the initial letters in Latin script on a banner and the biblical symbol above the figures. In this box that time there was put a bowl with gluing coal on which incense balls laid. Through the evaporation the incense, the "breath of God", penetrated through small copper pipes from the inside of the box in the neck of the evangelist symbols during the divine service to the outside and spread among the divine service visitors, who symbolically took in the "breath of God".
Notes
Suitable access with baby buggies is given
Wheelchair-accessible access is available